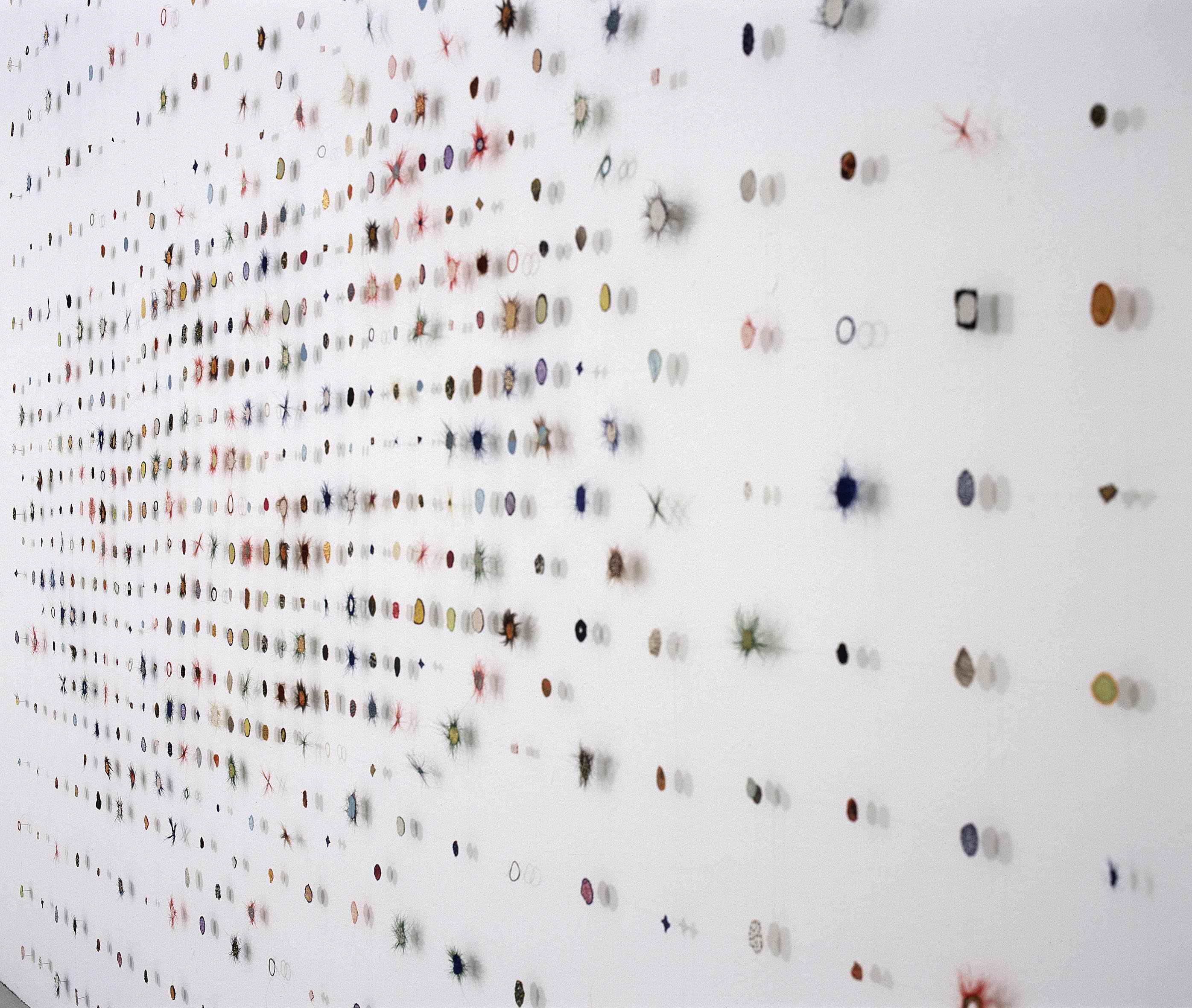 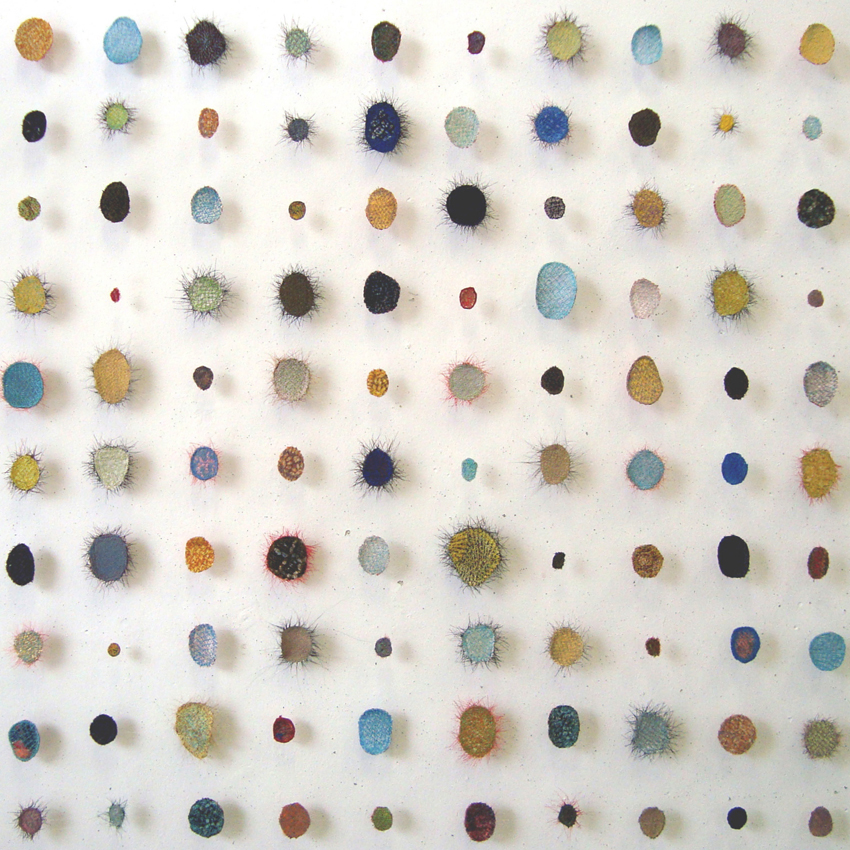 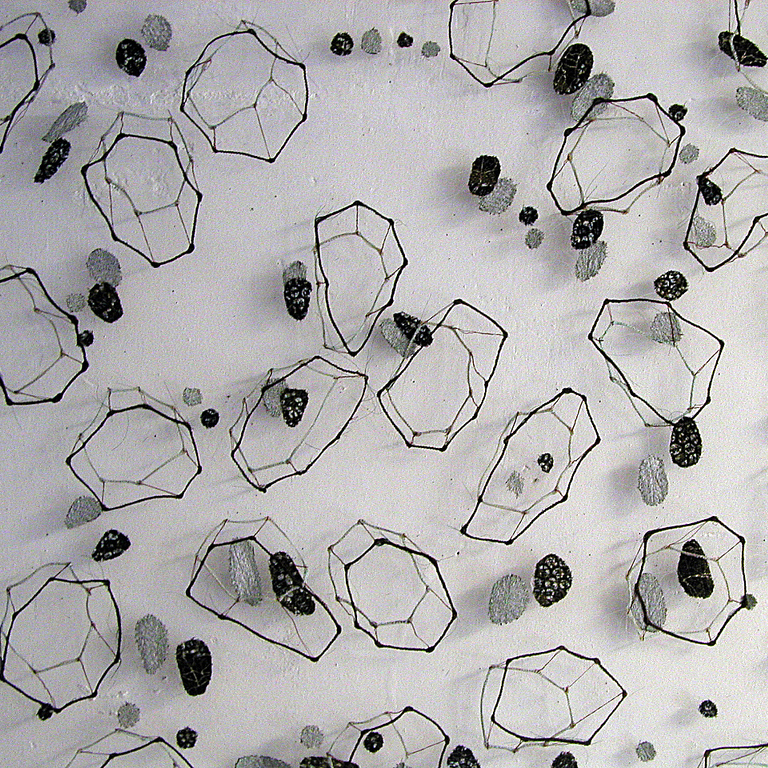 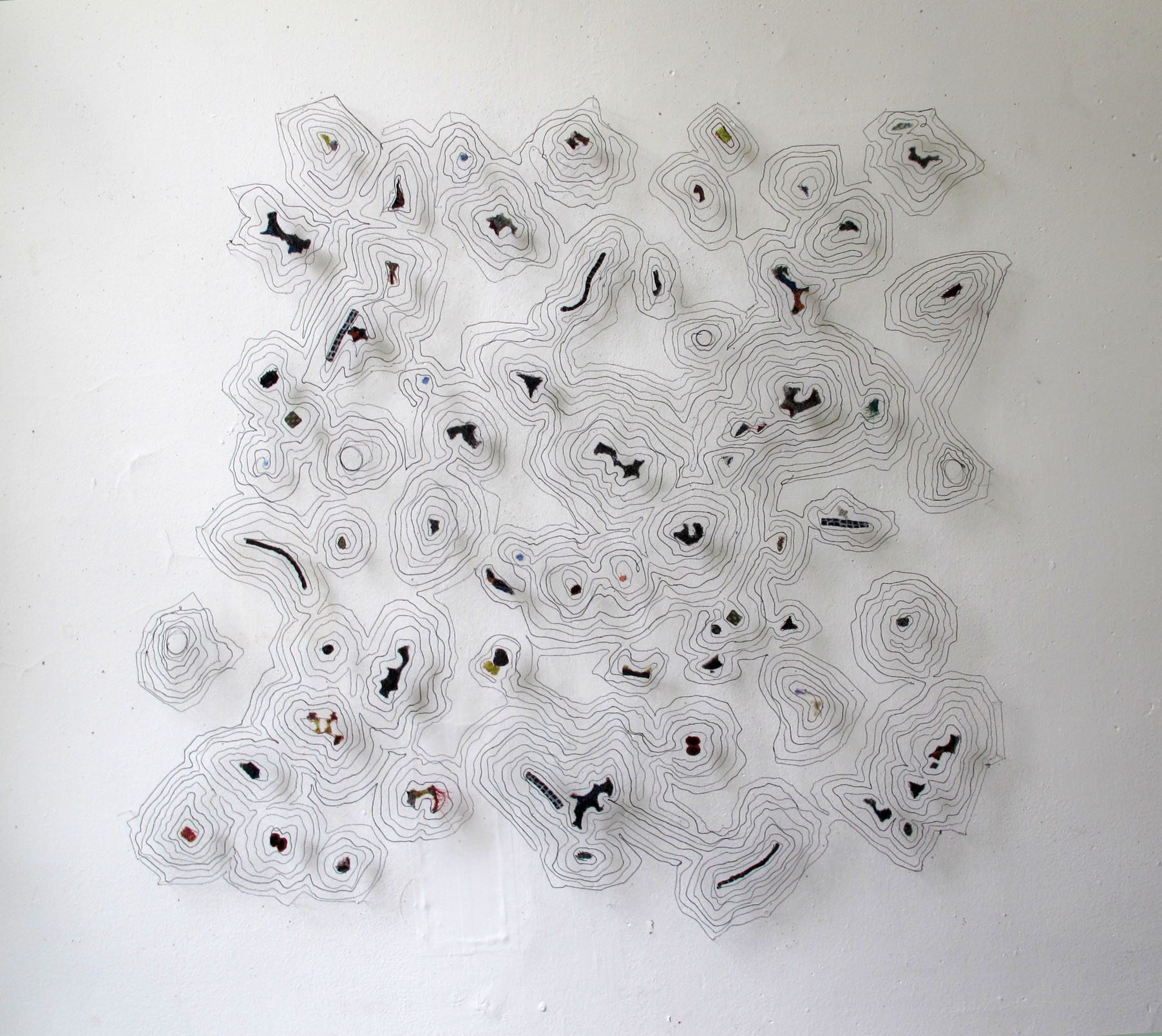 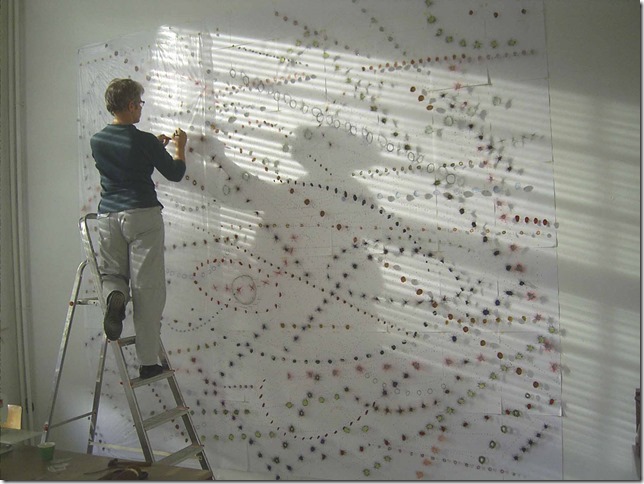 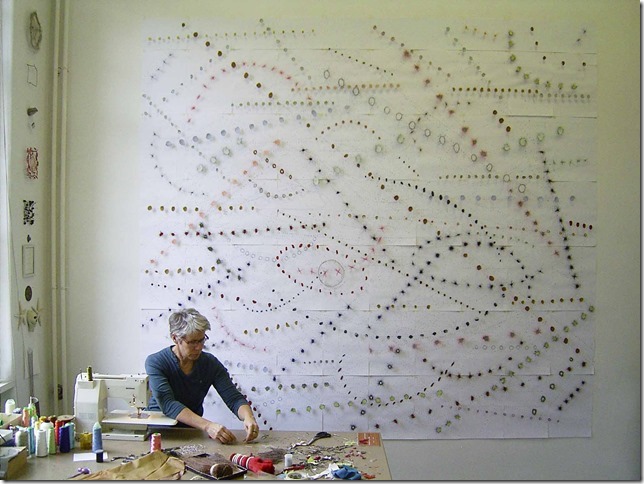 I am really impressed with Marian Bijlenga‘s work; she creates a very attractive 3d dimension, the object the wall and the effect of the light over both. It is a spatial drawing and you will learn a lot through everything she tells us about

You use different materials, but how you work with horsehair and fish scales? How do you treat them to be able to work with them?

When I studied textiles, I began by learning to weave, but for me, weaving was too slow. It took a lot of time before you could start, and I did not like the technique. I was looking for a more direct way of working. I took the threads held by the loom and began instead to make drawings, stiffening the fibre by dipping it in glue. It was a much freer technique. But glue and thread are not very durable, so I was looking for a material that was stiff on its own, and discovered the horsehair. The fibre provides the necessary strength and flexibility to construct embroidered compositions of lines and dots. And I found the fishscales by chance, at a fish leather factory. I was not actually searching for new materials, but they fit perfectly into the dot pieces I was making.

Did you learn it by yourself?

I studied at the textile design department of the Rietveld Art Academy in Amsterdam (1977-1982). But I developed the techniques myself.

Do you think about an idea, and draw a sketch and over it you chose materials, the geometry, the size, proportions? Or is a natural process?

My work is more like a natural process: it grows. For an outsider, the production may seem as painstaking as weaving, but it is the immediacy of the process that is important to me. I make one element and give it a place on my wall, and then I make another element, so the work grows until I like it. The work itself is meticulous, but I see the construction of each individual element as just the beginning. After I have the pattern pinned on my wall, then the real work starts. In the beginning, it is like playing. Then, finally, I use water-soluble fabric and make a drawing on it, so I know how to attach the pieces. Then I use monofilament to attach the small pieces to each other, and finally it all becomes one big piece. You only need some pins at the top of the piece to hang it on the wall. When seen with the right amount of natural light, the work seems to float just in front of the wall, defying gravity.

Which are your inspirations?

Much of my early work was inspired by calligraphy, but I explored the positive and negative, abstracted shapes created by calligraphic forms, instead of its narrative possibilities, It is very interesting when I cannot read the words — the rhythm of the writing, the space between the letters and the connections between the lines. It is still a source of inspiration, but my work has grown more abstract. Nature is more important than writing. Small circles, ovals and streaks grow into compositions that map positive and negative space.

I am fascinated by dots, lines and contours, by their rhythmical movements and the empty spaces they confine.

There are some of your works in which each piece that takes part is different from the rest. How long can it take to create one of your works?

Sometimes I work on several pieces at the same time. I can make a piece in a day, or in a year. In time, I might cut up a piece I don’t like any more, and use the leftovers to start again.

You always draw in space, but only walls, what about ceiling or floor?

The shadow on a white wall is an essential part of my work. By leaving some space between my structure and the wall, the object is freed from its background and interacts with the white wall. I need the silence of a white wall.

What would be your ideal project?

I don’t think in terms of an ideal project for the future, but when I look back, the

“Palimpsest” series (2007) comes close. Palimpsest implies working over an older, existing surface. My work builds on the work of my mentor and colleague, Herman Scholten (b. 1932), who constructed irregularly shaped weavings by working with yarns and pins on his studio wall. I began working with the traces that had been left by the pins on that wall. It was a map of the contours of his wall hangings. I transferred thirty years of holes left by pins in his studio to my own studio. Then I followed the traces they had left by covering each of the pinholes with a unique dot of colour, eventually producing a series of 11 large pieces, which I see as a continuation of where Herman Scholten stopped working.

You work by your own, do you feel good working alone all day long?

Yes, I like working alone in my studio. My studio is in a former hospital complex, where 120 artists have had studios to work in since 1984. It was my first studio, and I am glad I have never had to move. It is a very social environment, and we grow together in this inspiring place.

How do you deal, as an artist, with the highs and lows?

I have learned that I can always expect a high after a low. I am not in search of it; it just happens.

What about the money? Do you always succeed in making it work or is it something that’s not so important to you?

I can live from selling my work. I do not teach or make works on commission. When I started out, I was fortunate to receive a working grant from the Dutch government, so I could put all my energy into developing my work. Since then I have been able to support myself.

What is the most difficult thing about your work?

To say what I do in words. I prefer to speak through images.

What do you enjoy most about your work?

My work is my life.

Which work has been your biggest success? 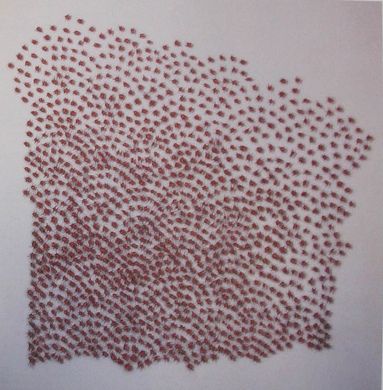 In 1999, the Red Dots won the Excellence Award at the 6e International Textile Competition in Kyoto, Japan. The prize included a trip to Japan. When the work returned to the Netherlands, it was purchased by the Amsterdam Stedelijk Museum. It was included in the exhibition that Queen Beatrix selected from the Stedelijk Museum collection in 2000.

It is whatever I am working on at the moment.

What is beauty for you?

Be guided by what happens around you. Don’t try too hard to direct, plan, master everything. For me, it is more important to be led by what crosses your path, the accidental encounter, things that happen outside yourself.